About Swan in the center

Having to carry out a client satisfaction survey in a deserted mall, Swan spends her days asking questions. But who really listens to the young woman’s desires? Apparently robbed of her sense of self, in a setting where intimacy seems unthinkable, Swan feels her libido gradually erupting. In this funny, moving, and wistful film, Iris Chassaigne paints a larger-than-life portrait of a world where sensuality must coexist with ubiquitous fanciful, fake images.

“In 2018, my graduation film at Université Paris 8, was a short film that happened on a motorway rest area, during a whole day. I was already fascinated by these non-descript locations, places of transit, and the shopping centre in Swann in the Centre is a continuation of that. I wanted to further explore how intimacy can emerge from the anonymity we feel in these spaces.

The deserted shopping centre in the film clearly echoes the main character’s loneliness, a contemporary loneliness, inherent to our capitalistic, individualistic society. They both seem to go around in a void. As some form of resistance, I wanted to blend this with desire, encounters and sex. What first interested me is the fact that toilets in shopping centers, like other stop-off points, are known to be gay hook-up spots, but mostly I wanted to talk about a desire that is close to me, that of a young lesbian woman. Therefore, I wanted to turn this place of purchase into a place of seduction, populated with queer characters.

Working with the actresses was very stimulating, our goal was to find each character’s peculiarities, while keeping a consistent tone. That’s why accuracy of frames seemed paramount; I wanted the setting to always take more space than the characters, to constantly feel the void that surrounds them. I also thought a lot about the films by Alain Giraudie, Tsai Ming-liang and Chantal Akerman.

Making this film was very rewarding. The exploration allowed me to better define what I wanted in films, and to strengthen my artistic collaborations, which I look forward to pursuing. Especially with the co-screenwriter of the film, Anna Cohen-Yanay, with whom I’m working on a feature film.” 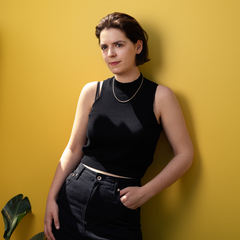