About Sons of Ramses

A Paris neighbourhood whose fate hangs in the balance, threatening construction cranes all around. La "Goutte d'Or", North of the capital, between Barbès and Porte de la Chapelle, lies the sole remaining shelter for sorcerers and wizards of a world that is slowly dying out. Those who predict what is to come and see what the mere mortals cannot, who speak the language of the lost children who haunt the streets, and who bring wondrous forgotten tales back to life. Everything can happen here, everything is magical. Magic as black as the night that no-one fully recovers from.

“First of all, this film is a memory of the first time I came to Paris with a friend, I was 16 or 17. We drove in through Porte de Clignancourt and, driving up the road to Barbès, I was stunned by the chaos and this intoxicating, erratic energy. I wanted to capture the shock I felt at that moment, even if the neighbourhood changed significantly, through its topography, through those who live or pass through there.

I kept the same first sequence throughout the screenwriting process: a psychic sees a client and tells her what her future could hold. I wanted to convey what makes part of the magic of the neighbourhood through one character, part crook, part wizard, who’s very good at what he does.

Then the film evolved with the circumstances, like those awe-inspiring construction works around Porte de la Chapelle, which usher in another type of chaos that I also wanted to depict. And with the actors, of course, particularly Karim Leklou, whose countless subtleties brought the sensitivity my character most probably lacked. And the street kids who suddenly appeared in the film as they appeared in the neighbourhood a few years ago.

All of these components merged to create the confusion I was looking for. When we struggle to discern what is real and what is imagination and wonder. And through this character who discovers he’s actually more powerful than he thought, it’s also a metaphor for art and film, as a person fulfills something he thought was beyond his reach.” 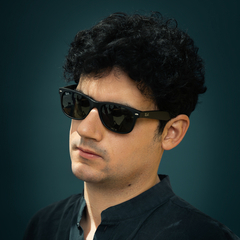