“When Oliver Sim suggested I made a film from his music, I felt in him a transgressive, adolescent urge which I immediately related to. Tackling face on the very intimate topics and intense emotions of his songs, and smearing them with gore, eccentricities, queer wit as much silliness and naiveté we could take, such was our common goal. Oliver dreamed of having a monster as a protagonist; a tragic, grotesque monster, both fragile and flamboyant, around which we had to create a strange but familiar cocoon, a TV set shot as a theatre stage that opens on fantasy or the shadows of one’s memories. Backed by our brilliant and adventurous DOP from Québec, Vincent Biron, Oliver and I reconnected once again around our love of collage, since Hideousswitches unexpectedly between black and white and colour, 35mm and vintage film, camp horror and a story of forbidden love. A collage with a premium on pleasure and the freedom to call on our common references – from Carrie to Scooby-doo – and our respective guests for the cast: I discovered the virtuosity of Fehinti Balogun, the friendly Kate Moran, the sexy César Vicente (revealed in Pedro Almodovar’s Pain and Glory) and fancy guest stars. And from this clash of various worlds, people and pop culture that Hideous weaved both meaning and emotion.” 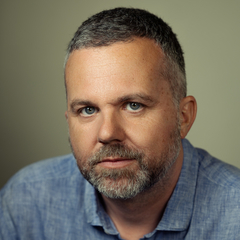