In Sohee’s eyes - a high-school student striving to keep her oar in the water in a world perpetually ablaze – dance provides a glimmer of hope. Her body is then free to move, her mind empty of all the daily parasites that are gnawing at her. After A Girl at My Door, director July Jung comes back with a riveting investigative film. Da-eum-so-hee (Next Sohee) is a fascinating epic about identity, with the remarkable performance of Doona Bae and Kim Si-eun.

"Can you tell me about the genesis of the film?

I learned about the death of a high school girl introduced in a Korean investigative report program. The girl went on an externship at a vocational high school and killed herself in less than three months, so I wanted to know what really happened. I looked through the data and found out that this wasn’t just about this girl. It was everyone’s problem. It also included me, who had nothing to do with the case. The story started with a real event, but I wanted to move on through the film. I wanted to listen to their stories and think with others who had nothing to do with this story, just like me, through the power that only films could achieve, not just to report the truth.

Where did the desire to film this double portrait of women come from?

That relates precisely to the composition of  the first and second half of the film. The audience follows the girl who appears from the beginning and faces her death from her perspective. We can’t disagree with death as an ending in the development of the film. After that, we look into the girl’s death again through the detective who appears afterward. There are things that we already knew, and there are things that come up later. This film can’t be a story following a girl, it needs a character who questions girl’s death and explores it at length. This character can be both me and the audience. I wanted to look at the girl's death in every way I could with the audience, including the story of the detective. Only then can the story be expanded and continued to Next Sohees that appears in the film.

I drew Sohee as an ordinary high school girl who was young, confident, and unique. It was also important how the girl gradually changed after she started working. What did the last ray of light mean to a child, who was losing her brightness? Was it a pleasure? Or did it make her feel more lost? I myself approached Sohee with curiosity and a desire to get as close as possible. Yoo-jin is a detective who quickly returned to work after her mother died after a long illness. Tired and exhausted, she can't even o unpack her luggage boxes at her new home. She's a person who doesn't care about other people's business and doesn't care about how others see her. Maybe the way she lives her own life looks similar to Sohee’s. It is also similar they both lose their temper easily.

I tried to find Sohee as a fresh face that we had never seen in Korean films , and as soon as I met and talked to actor Kim Si-eun, I was convinced that she was the exact Sohee that I was looking for. It was very lucky for me. Before casting Sohee, I was only thinking of Doona Bae as Yoo-jin. The character who can captivate the audience with her own aura even if the main character dies and appears in the middle of the film. Beyond the previous relationship and the ecstatic memories of the prior work, Doona Bae is the only actor I know who can complete this film on this serious mission. Above all, there were expectations and beliefs about Yoo-jin’s detailed emotions that she would express unrivaled.

You film the daily life of a high school girl who ends up getting lost in this life. Can you tell me more about this?

I've heard about a firefighter who was isolated at the fire. Trapped in flames and smoke, he can't get out on his own unless his colleague comes and saves him. We can't see him outside of fire and smoke. We can't hear him no matter how much he shouts. "If no one else approaches an isolated person, he or she will die." I think it's a similar situation for many people who give up. The hope that if someone could approach, if there’s someone who doesn’t overlook the rescue signal that must have been desperately sent somewhere at some point, maybe it would be different. I made this film thinking only of that hope." 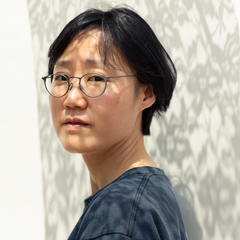