Man in a Blue Sweater

Teymur plunges us once again in the intimate, magical Azeri landscape with a variation on the myth of Orpheus and Eurydice. Arif, a photographer who has been grieving over the recent death of his lover, wants to get her back by travelling to the very heart of the country to meet a blind man who can summon the dead. And here – in a combination of fairy tales, dreams and memories - starts the story of the couple as it is reunited in a village, terrorized by a malevolent being as well as the memories of war.

With this primeval love song, Teymur – much like Apichatpong Weerasethakul’s cousin from the Caucasus - drives a two-part story that blends intimacy and politics, the ancient and the modern world. Thus, through the incantation of cinema, he calls upon the dead, past traumas and magical spirits. 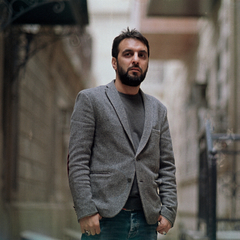