At the same time as she’s developing Selene 66, George, - her other ongoing project - is the story of a young father whose life is turned upside down for a summer. Having divorced from Alice, George dotes madly on his five-year-old daughter Daphne, whom he sees every weekend. Alone and isolated from her family, Alice makes the ultimate decision to leave Athens for Thessaloniki. George and Daphne shall bear the consequences of this decision. George is devastated, and one month later, when he sees his daughter again, Daphne has changed: she prefers her mother now.
George is an intimate project where, rather than finding answers, Jacqueline reinvents her own father’s life after this separation and questions fatherhood in the deeply patriarchal Greek society. George is meant to be an impressionistic portrayal of a man losing his self-esteem, and an ode to the 90s that Lentzou loves so much. 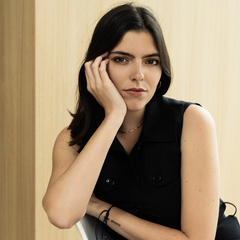