Like any summer, 16-year-old Antonia spends her holidays at her grandparents’ in Mallorca. But when her grandmother suddenly passes away, the grieving Antonia, looking for new experiences, puts on the clothes of the deceased. This trivial gesture will soon blur her identity: her grandfather recognizes his late wife in her, her mother behaves with her like a young girl. As the summer flows strangely by, Antonia learns that growing up means discovering who lies within.

By expanding her eponymous short film, Lucía intends to go further in her secretive, radiant writing of self-discovery, inspired by ghost films and summer tales alike. Her films avoid smoke and mirrors as well as certitudes to impart the reeling shift of a family unit, rocked by transient appearances and disappearances, where only one tangible thing remains: belief in the powers of incarnation. 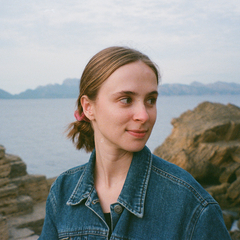