Interview with the director Mathieu Vadepied

The film takes a stance opposite to general accepted ideas. In this story, all the ingredients for dark drama are reunited: two kids are dealing in order to uproot themselves from the prevailing social determinism which entombs them in their condition of immigrants’ children. But Mathieu Vadepied chooses a luminous and humorous approach, without taking the easy way about it. Learn by Heart is not a slapstick comedy, full of punch lines and comical situations. And the reason why it is so deeply embedded in the fierce reality, is to better disprove all its simplistic and defeatist stereotypes. Thanks to its sharpness, its quirky humour and a very accurate sense of irony, both puzzling and engaging, it sweeps away naive optimism with a healthful laughter, totally disregarding the politically correct clichés. Polygamy, school failure, drug traffic, the film grabs all topics, as cheeky and impertinent as its two young heroes.
“In the writing process, a quite difficult balance needed to be found between the raw aspect that couldn’t be watered down and the “fable“ part which allowed more innovation and fantasy. In the meantime, the researched point of view was that of the child’s-eye and the fidelity towards their own way of understanding the events. Therefore, during the shooting, came the idea to stay close to a documentary approach. For instance, all the scenes involving the two heroes were shot with two cameras and with no additional lighting. I wanted to seize the unknown and the unexpected. Grasping something of the specific moment when, as a teenager, everything arrives with force and energy, which is sometimes difficult to control.” 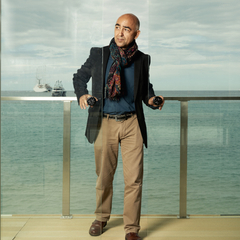