About When You Finish Saving The World

In high school Ziggy is somewhat less than popular, but on social media he’s a young folk-music star. He engages with the whole world, except his mother, Evelyn, who works relentlessly as a social worker. There’s static on the line. Jesse Eisenberg weaves the portrait of these two characters – exquisitely played by Julianne Moore and Finn Wolfhard – in their quest for acknowledgement and affection. A punchy, witty and utterly elegant dramatic comedy.

How did you decide to take the plunge and get behind the camera?

“My background as a writer is playwriting and, when I think of stories, they are almost always for the theater. In fact, this story began as a three-person audio drama for Audible, comprised of a series of monologues. When I started to explore the story further, it became clear that it would work well as a film. The story had elements that were inherently cinematic – interesting settings like a women's shelter and small college town America; internet performances and online fame; two characters who don't get alonge but who are living parallel lives. As I began writing the movie, I tailored it to my strengths, which are character-centered humor and an interest in good performances. And I avoided writing anything I felt would be too difficult for me to direct in a first film, such as technically complicated sequences or sharp shifts in tone. I felt that I had been on enough movie sets to understand what would be required of me for this kind of movie.”

Why did you choose precisely to talk about the relationship between a working mother politically committed and her teenage son who tries to understand why everything is political around him ?

“I think this story represents an internal struggle that I deal with all the time. I am in the arts – like Ziggy is in this movie – but I am surrounded by people who are doing social justice work – like Evelyn is in this movie. And I have trouble reconciling the value of my work versus the value of social work. The debates that Ziggy and Evelyn have about the meaning of their respective lives are the debates that run through my mind daily.  And they both make good arguments for their lives – their common flaw is that they overlook each other's goodness.”

The cast is amazing. How did you make your choices?

“When I was casting Ziggy for my Audible project, my wife suggested Finn Wolfhard because she knew he was also a musician.  After about a seven minute Google search, I realized he was not only so talented and funny and bright, but also perfect for this role.  As the movie became a reality, I was just wishing that his busy schedule would allow him to be able to be available.

The day I finished the screenplay, I asked my agents to send it to Julianne Moore. Is there a more compelling, brave, rigorous, luminous screen performer?  She has been my favorite actress since I started watching movies that were not about Ninja Turtles.  I had the sense that Julianne might like the character because there is a rigidity and specificity to her that I know actors enjoy playing.  So I had the feeling that I would be able to attract someone of her caliber who, by all other accounts, is overqualified for a smaller movie like this.

As for the other main characters, I only knew of Jay O. Sanders, who plays Julianne's husband.  He's one of my favorite theater actors from this series of Richard Nelson plays and I wrote the role with him in mind.

Billy Bryk, who plays Kyle, is Finn Wolfhard's real life best friend. Finn told me his best friend was auditioning for the role but I didn't realize it was Billy.  When I saw Billy's audition, I was elated.  He was so perfect for the part – realistic, enigmatic, charming, masculine in an unthreatening way.  And when I found out it was Finn's friend, I felt it had been fated somehow. Finn and Billy play characters that are so culturally and temperamentally opposed to each other but both have to fit into Evelyn's idea of what a son could be. So it felt like not only great casting, but also spiritually cohesive.

Alisha Boe initially turned down the audition for this movie because she heard the role was a high school student and she felt she had outgrown that experience. I could certainly understand that because I went through a similar experience as a young actor. However, one of the challenges we had with casting this role is that actors often felt too young for the nature of the dialogue. My wife knew of Alisha and showed me an interview with her and I knew she'd be right. She can play sharp and self-actualized and generous without being obsequious.  She's an outstanding actress.

Eleanore Hendricks plays the final leading role. This is the toughest role in the movie because it's one of those movie roles that feels strange when played by a more traditional actor. There are certain dramatic beats that, if played traditionally, seem like melodrama. Eleanore's instincts and presentation are completely singular and the way she interprets language and conversation is so unusual that she allows me, as the director, to shape the expectations of her character in an unpredictable way.  She's a very special actor and an important presence in independent film.”

What was the biggest challenge during the shooting, for you as a director?

“The biggest challenge for me was dealing with and worrying about Covid. We were shooting at the worst possible time – at the height of the pandemic before vaccines were available. It impacted every aspect of production – from the number of extras we could safely use to the hours we could work to flights getting cancelled at the last minute to losing an actress the day before shooting to a Covid exposure (she was not symptomatic). I felt very fortunate to be able to shoot during that time and very thankful to A24 for allowing so many contingencies, but it was unusually stressful. Luckily, though some tested positive and had to isolate for ten days, no one on our crew developed serious symptoms.”

The photography is fantastic, very elegant. How did you work with your DOP?

“Emma Stone, Dave McCary and Ali Herting are the producers of this movie.  And even before we met with Ben Loeb, our cinematographer, they encouraged me to shoot on film. I've worked a lot on 16mm and always loved the look of it and felt it would be fitting for this story. When we met with Ben Loeb, he agreed and was very eager to shoot on film. Ben became my right hand during the production. We have very different sensibilities – I am anxious and impatient and desperate to be funny and Ben is elegant and calm and Scandinavian. We are a good match because I know my instinct for humor is best when it's reined in.

Ben is as specific as he is versatile. From Mandy to Pieces of a Woman, he can do heightened theatrics and naturalism with equal skill.  I loved the use of zooms in my friend Richard Ayoade's movie, Submarine, because zooms can feel simultaneously heartfelt and satirical. They can bring you closer to a character while also commenting on that character's behavior.  I thought this would work for our movie because the movie features two leading characters that are very emotional people but who also act in some comically self-conscious ways. I asked Ben if we could get away with a few zooms and crossfades and he was thrilled. This became our language – a kind of naturalism mixed with some wry commentary on the characters in their more embarrassing moments.”

How did you come up with the songs played by Ziggy in the film?

“The music in the movie came out of my Audible project. When I was writing this story as an audiobook, I thought it would be interesting to take advantage of the medium and have Ziggy be a singer-songwriter, rather than just a cool internet 'influencer.'  So I started writing songs for him to sing and Finn actually sings them on the Audible project. The goal with the songs is that they be simultaneously immature and skilled, raw but well produced, young but not stupid.

When I was thinking about the score for the film, my first thought was that the music is an extension of Ziggy's world. I met with Emile Mosseri, who's one of the great geniuses working in independent film today, and mentioned this concept.  He immediately started sending me samples of music that sounded 'homemade.' We connected to this cheap Casio keyboard riff that opens and plays throughout the movie and ultimately becomes Ziggy's finale. Emile's score is so unusually brilliant because it's deceptive – it plays like traditional movie score while also seeming like something Ziggy would have written (I wrote the dumb songs that Ziggy sings in the movie like "Alumni Alone," which he sings in the club.).” 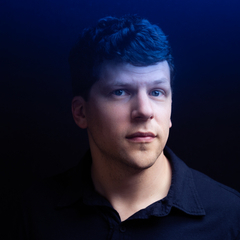 When You Finish Saving The World