A young woman scatters her brother’s ashes from a mountaintop, another describes her love affairs, and a future bride is jilted a few hours before the ceremony… It all happens in the same taxi, and all the clients have the same face. The backseat turns into a couch, a conduit for the voice of empowered women. A man answers, infatuated with a woman whose name he embroidered on his chest – Madeleine – the same name as the spectral woman in Vertigo. Imagine is also a film about ghosts and projections. Or is it setting the stage for a couple’s strife as they (re)play their (r)elation.

“A couple of years ago, I was in a relationship. One day, talking to my partner, I told her that the relationship l had with her in my mind was much more fascinating than the relationship I had with the “real her”. I told her, jokingly: “Even if we break up, my memory of our relationship in my dreams will be like the first time, everlasting and absolute”. This thought obsessed me and I decided to write a script and make my first feature film.

I believe that dreams are a complete contrast to lethargy. They’re rooted in our conscious mind. I believe we should have fresh, breathtaking experiences in our dreams. My fascination for this active dream world was the basis for the film. The real world is too predictable and too repetitive. Sure we take comfort in that consistency, but it is such a bore. In this film I tried to do the opposite. The characters have no name. They’re unconnected and totally free to be who they want to be and take us anywhere we want to go with them. Love transcends everything when it’s about letting go and going somewhere else, preferably a fun place, perhaps on another planet where things are more poetic and joyful than the serious reality we easily identify with.

There are a few actresses in Iranian cinema that you can imagine in your dreams. And “Yes” and “absolutely”, Leila Hatami  is my dream actress.” 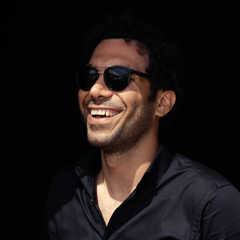