Will loses himself in his addictions and along his path his demons keep multiplying, haunting him day and night. Plagued by psychotropic drugs, the life of this PhD student and family man has become a living hell. Through a moving tale and rotoscope animation, Scale investigates the connection between dependence and the creative process. It is a visceral exploration of Will’s depths, as he strives to resurface from the distorted figments of his downfall.

“I'd first read Will Self's Scale – a novella about a man who thinks his veins are becoming the motorway system of the UK - back in the late 90s, when I was a teenager. In 2016, after making a number of self-authored, independent shorts, I met my producer with whom we started developing the project for the film: I was particularly interested in exploring the often-misunderstood link between addiction and the creative process.  It was only after I'd developed this particular style of rotoscoped animation it occurred to me that this story was the perfect fit for the technique.

For me, it was important to portray addiction not only authentically, but also in a way rarely seen in film, which is why I approached it from a surreal, hallucinatory angle with cruel irony at times, rather than the social realist one we often see in British Cinema. Animation is a way of saying things that cannot be said any other way. The film plays with literal scale and perspective to represent our protagonist losing his grip on reality; the non-linear narrative helps to keep the audience disorientated: we wanted the viewer to really experience Will's predicament.” 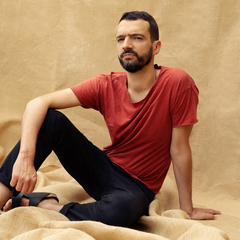