A thoroughly contemporary poem made of three stanzas that echo one another. Ray Manta tackles the ailments of our time, vacuity, authoritarianism and repression. A stunningly beautiful melancholic film that explores the pockets of resistance in which the characters can reassert their freedom. A polyphonic tale, both rooted and elevated, consistent with its content, which, in one fell swoop, through this cinematic endeavour, seeks and produces these very empowering intervals that shape our new connection to the world.

“Manta Ray is another triptych, which is a format that I love and have already used in two films, but this film is the expression of my desire to go further into fiction, towards something more playful both visually and in terms of cinematic tools. It’s also an attempt for me to renew my passion for cinema. As for content, it pursues the desire to shoot people who wish to upend their connection with society, and maybe conversely, strengthen their connection to the world.”

“The first chapter displays concrete items from my wife’s life, Kamilya Kuspanova, who came to France from Kazakhstan ten years ago. Paintings of Manta Rays and lonely, incandescent animals, which is what the film started from. The second chapter comes from the insane intensity of Sergei Prokofiev’s Cantata he composed for the 20th anniversary of the October Revolution, and the Ghost Rider, the nameless apocalyptic rider who pierces through town at 200 mph. The third one is inspired by dreams and the image of an imaginary area hiding in the depths of the river Seine, inspired by Ivan Chtcheglov’s (aka. Gilles Ivain) first situationist texts. I put together the three sides of a single essence as an exquisite corpse.”

“My starting points are the signs of our time; in this instance, an authoritarian, condescending and sterile atmosphere. I gather contending beings and images that I feel are poetically potent and I try to compose a secret melody to contend with what I perceive as vacuous and violent in this day and age.” 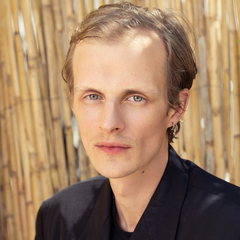