A house high upon a mountainside. A swing high up in the air. Father and son hold each other in a never-ending fall. Through these impactful images and a visual world that echoes Edo-period Japanese paintings, João Gonzalez brings life to a peaceful, sweet and intimate tale that raises the greater question of the bonds between humans and nature. His dizzying, epic mise-en-scène calls to mind the actual risks of global warming and allows for the eventual possibility of pacific reconciliation.

“Like my two other films up to date [Nestor, The Voyager], Ice Merchants was born out of an image/scenario that came to my mind and stuck with me. Most of those images “appear” while I’m dreaming or about to fall asleep, although sometimes they also come to mind during the day. Then, I spend a good amount of time ‘daydreaming’ and exploring that reality through drawings and writing, until I feel like I found something that resonates with me. This is my only way of doing location scouting, since my film’s locations don’t actually exist in real life. And that’s when the ideas for the actual film’s narrative start to occur, that naturally end up covering topics that are personal and dear to me. My first two films were more focused on psychological issues that were part of my personality, projecting myself on the narrative’s protagonists. Ice Merchants covers a more human story (in my view) about family connection, about simple daily rituals and routines, studying them metaphorically as a foundation of human relationships in the long run. All of my three films end up covering loneliness and solitude, as well as some sort of conflict between protagonists and the realities where they exist, which makes sense since I treat those realities as active characters from the beginning.

Aesthetically, I also always tend to incorporate my interest in strong shadows, extreme camera angles, and limited colour palettes in my films. There’s also an “on-going” treatment of the film’s soundtrack and sound-design, that I start working on since the beginning of the film’s production, alongside the animation (sometimes even before).” 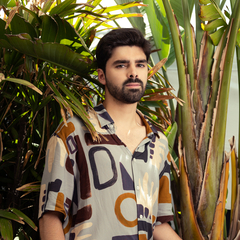