In a deeply moving diary-like narrative, Shuli Huang confronts personal and family images with introspective thoughts, adding short, interspersed conversations with his mother. The gentleness of Super-8 footage and the ostensible happiness of the scenes, often awash with sunlight, are a harsh contrast with the complexity of their relationship, as they love but can’t understand each other. Thus, the film resonates as a heartbreaking farewell letter, in which, in between the lines, we see the gripping portrayal of a norm-obsessed culture that forces the protagonist to be nothing but a mere shadow, even in his own film.

After I returned to China from New York during the pandemic, I bought a super 8mm camera. I brought it with me everywhere I went, filming people around me almost without a precise intention in mind. Eventually, as my need to discuss my truth with my family got too big, I put my hand to the celluloid I’d been stacking in my suitcase and started drafting a letter seeded inside me years ago.The filming process lasted for almost a year, on and off.

Yet life is full of uncertainties and coincidences. It was like the film was coming into its own shape. During the Chinese New Year in 2021, my mother and I had a conversation that accidentally switched my film’s narrative; as well as my life. During that conversation, I looked at my mother for the first time in years. I saw deep fears and pains in her eyes where my language and words failed to be reached, where, I realized at that moment, film could be my answer.

That’s when this film started to come about. It felt fresh and natural for me to find texts out of the montage of images. And vice versa, texts that grew out of images breathed new possibilities into the creation of images. Therefore, I kept filming during the writing and editing. Everything grows naturally. It was an everlasting process of questioning and exposing myself through cinema. It almost felt like diving into an honest conversation within myself and taking a long swim into my experience and memory, searching for the roughest truth, which hurts but also heals. Sometime after I finished the film and said goodbye to it, I could finally catch a breath and see the whole process clearly. However, as the narrator in the film, as a filmmaker and human being in progress, I felt astray, drowned, and flooded with the rawness of emotion in those moments when I was trying to just be myself. Today I am still filming, simply being honest with myself and the world, and I don’t stop. 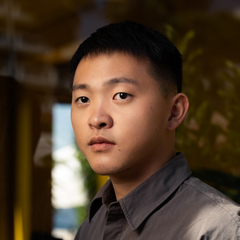