Notre Vie dans les Forêts Our Life in the Forests

In 2017, Magali is finishing up Expire, a short set in a disappearing world, before coming across Marie Darrieussecq’s dystopian novel Our Life in the Forests, a “coup-de-foudre”. In the City where surveillance is omnipresent for the good of everyone, Marie leaves a fairly decent life, despite the state of her health. Thankfully, she has a “Half” she calls Mia, a sleeping clone, harbouring organs for her to use as she needs them. But she feels guilty about the situation. Everything changes when her body once again fails her: Marie has a stroke. As she wakes up, she realises Mia’s eye has been transplanted onto her. But when she goes to check up on the clone, scared that she might find her disfigured, she sees that the Mia’s eye is still very much in place. Marie looks for answers and it is amongst a group of fugitives hiding in the woods, a sort of liberation army of “Halves”, that she will finally find them.

For this project, Magali aims to produce a work of science-fiction with an auteur quality to it, by closely following these increasingly paranoid and revolutionary characters. This is an elegant, stylish film about clones, with a “cinema verité” angle, especially troubling as the world it is set in seems so close to ours. 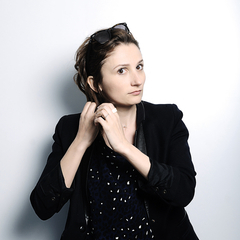