Elias rekindles with the criminal underworld of Algiers with Omar, a fifty-year-old criminal exiled from France. His daily life is laced with small-time rackets but melancholy is always around the corner, pushing him to spend his nights in local dives. Much to Zohra’s dismay,as she would like him to settle down and build a family. Upon catching up with his old mates, Charlot and Rico, who are now dealing with young crooks, the penny drops: he’s a has-been. One night, as he decides to drown his sorrow in alcohol, he meets young Momo and his crew trying to rob the patrons. Omar then takes these youths under his wing. They’re going to take on the streets of Algiers. However,the underworld is filled with danger and death.
Elias’ starting point is Algeria, this “island” where the smell of yonder years lingers. Paradoxically, the city is also the thoroughly modern embodiment of what is at stake in contemporary societies. He wants to give this “playground”an iconic story that fits in the zeitgeist, a genre film reminiscent of Sergio Leone and Takeshi Kitano. 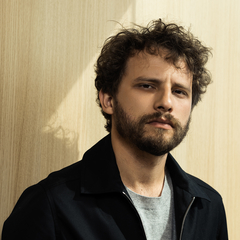