Alongside The Twentieth Century, his first feature that is currently in post-production, Matthew is developing Akhavan. Two children, Hossain and Nazgol, discover a 10,000 rial note trapped in ice. Following the zany advice of a stranger, they set off to find a turkey monger that can lend them the axe that will break the ice. Meanwhile in Montreal, Martin, an unemployed and depressed actor, agrees to travel to Winnipeg to act in Akhavan, the last film of director Matthew Rankin. Following a chaotic journey during which he ends up having to look after an orphaned turkey, he arrives in what appears curiously to be an all-Persian speaking Islamic Republic. He crosses paths with Nazgol and Hossain in a moment of strange humanity… Akhavan is a project that toys with space and time, utopia and the grotesque, and the barrier between seriousness and irony. Through it, Matthew sheds light on an inner conflict that opposes the desire for idealism and the impossibility of fully committing to it. This is a hybrid film mixing together different cinematographic languages, an absurd metaphysical reflection and a call for solidarity. 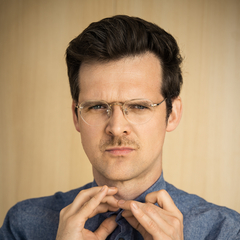