At the heart of this masterful film, lies a heartbreaking character, a young woman who exists in all her suffering but is never reduced to it – and along this suffering, a tender take on writing, poetry, which is seen both as an elegy and a remedy, a correspondence that fill in the gaps of a - seemingly damaged – conversation. It reminds us of an obvious fact: you never write to a crowd but always to a person you chose among them.

“There were several elements that led me to the idea of this film. Perhaps the initial source of inspiration was the melancholic mood of Sarajevo and its architecture that touched me personally while I was living there. Although I wanted the film to be timeless, I left a small window to an era of the late Yugoslavia. The viewers can see the architecture of the neighborhood built for the Sarajevo Olympics in 1984 and interiors of a flat that used to belong to a Yugoslavian architect. This was not just an aesthetic choice, but also my wish to try to preserve at least a couple of bits of that disappearing world in the film. Another crucial moment in developing the film was when my mentor Béla Tarr suggested to me to make an adaptation of The Raven by Edgar Allan Poe. But I wanted to relate to Sarajevo more directly and to make the film more personal, yet, it sparked an idea of working with a local poet, Marko Tomaš.

I wanted to explore visually that tight, reciprocal, and yet vague relationship between space and emotions of the film characters – a poet, Marko, his partner Maja, and Sarajevo. In the film we can see the distance between the two characters, and to build on that I chose to portray the moments between the conversations that we never get to see. This photographic narrative set on hopelessness also unfolded through Marko's poetry introduced to us through Maja listening to it when played on the radio. I chose to portray a couple who are struggling in their relationship and hope that they could save it by moving flats. But this move doesn't help, instead they merge into the melancholic mood of Sarajevo.” 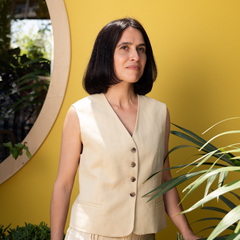