About Love According To Dalva

In her quest for truth, Emmanuelle Nicot tackles the need to learn to love again when one grew up under the sway of one’s father. Always driven by her desire to understand all her characters, the director never fails to strike the right distance with them. Propelled by precise and accurate editing, Emmanuelle Nicot’s fantastic mise-en-scène conveys young Dalva’s transformation with great kindness and dexterity, as Dalva – wonderfully interpreted by Zelda Samson – is heading for her new life.

“Being under someone’s hold is at the core of all my films. I was very moved by Lyes Louffok’s book Dans l’enfer des foyers. I then spent 2 full weeks in an emergency shelter in Forbach, in Eastern France. What shocked me was to see to what extent these children that were put in care stuck by their parents in facing justice. I understood that actually, for them, the violence came mainly from being taken away from these parents.

Real monsters don’t exist. It’s very difficult to escape somebody’s hold because there’s often a lot of love as well. One of the main problems for children in care homes is that they are love starved. It’s very complicated for Dalva when her father falls from his pedestal. How can one live in a kingdom without a king?

I went about it as for a documentary. I needed to feel I had the right to tell this story. Caroline Guimbal, my DOP, and Suzana Pedro, my editor, come from documentary filmmaking. It’s very interesting to work with them because they have a lot of respect for people.

The open casting process allows for unbelievable spontaneity and truth. From the moment we started writing the script, Dalva’s age was impossible to define. Zelda Samson was perfect for the part, we fell head over heels.” 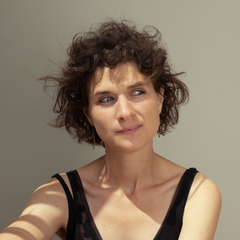 Dalva Love according to Dalva