About It's Nice in Here

From the get-go, it’s Nice in Here plunges us deep into the fragmented memories of a black girl, Imani, as she remembers her tender friendship with the sensitive Crimson. Then comes the dark, alarming testimony of a rookie police officer as he tells us about the day that led him to kill Crimson. Entwining these two subjective perspectives, Dutch director Robert-Jonathan Koeyers shares a heart-breaking tale of police violence and - through a stellar animation strewn with ghosts and memories – the persistence of racial injustice.

“In my final year at the Willem de Kooning Academy in Rotterdam, where I studied animation, I was confronted by a video of a woman live-streaming her boyfriend bleeding to death in the driver’s seat next to her. Her pleas and prayers were occasionally interrupted by the police officer yelling at himself in the background with a genuine sense of panic in his voice. It felt like, in a matter of seconds, two completely different stories and experiences were unfolding at once.

This became the foundation of It’s Nice in Here where, rather than giving concrete answers, I wanted to explore how stories like these get told, (mis)remembered and eventually entirely reshaped. I wanted to look beyond the uniform and the facade of the characters in order to find beauty, poetry, and softness in places we often tend to overlook.

In recent years I have been focusing mostly on telling stories through a Black lens. Some of these works include the short films: Black Tears (2020) and Here: A Visual Poem (2019).

From the very beginning, I knew that the film could only operate if we made use of convincing juxtapositions and contrasts. You can see this back in the way the story is told through contradicting testimonies, as well as through the use of different visual styles throughout the film. I’ve never been interested in looking for one objective truth, but instead wanted to explore the messiness of memories and how the carefully curated realities of our characters help shape the way we feel about their worlds, their truths, and about the boy who was caught in the middle of it all.

Making this film certainly has been a long and an intense journey, often spending days or sometimes weeks on an individual shot and never quite feeling like the end was in sight. Especially because the film is so scattered and fragmented in nature, it was difficult at times to feel like we were making progress at all.

But after several years of researching and thinking this film into existence, and after several more years of actually producing It’s Nice in Here, I’m incredibly happy to see how everything was finally able to come together. Seeing all our choices finally work in tandem, makes me all the more appreciative of all the hard work that the entire team has put into making this film possible.” 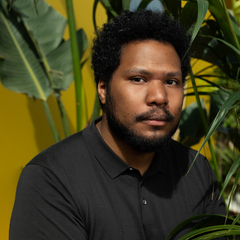