Both a bright vampire film and a sad teen movie, Inherent eludes any set programme to blend various genres. The film should be regarded as a saunter, a stroll through the lonely, fringe existence of its blood-sucking heroin. There’s not need to disclose the violent changes and throes of adolescence. The film would rather let the worried gazes of an ashen mute speak, it would rather observe the elements as the wind blows and the sun sets, to tell the story of a growing desire and a forced emancipation. 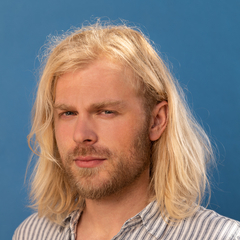